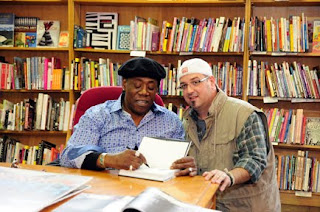 Sometimes being at the right place at the right time pays off. Before the October Chester County Camera Club meeting, I went to have dinner at the Chester County Book & Music Company. As I approached the door, I noticed a flier advertising that Clarence Clemons, saxaphone player of the legendary Bruce Springsteen & the E Street Band, was to appear to sign copies of his new book, Big Man. I had offered my services to the CCB&M Co. before, so I decided to see if they could use me. I left my number and waited.

I received a call the next day explaining that the store manager would love for me to photograph the event, but had to check with Clarence's people. I told her to let them know that I would be more than willing to send Clarence the CD/DVD of the photos. Didn't hear anything...I decided to go to the signing anyway...What was the worse that could happen? I arrived to the store just as a black, stretch limo appeared in front of the store...I tried to peek, but didn't see Clarence. I found Thea, the store manager, and she told me to set up in the Media Area...As soon as I fired off some test shots, Clarence comes walking in.

The entire experience was quite remarkable. I have met some celebrities, and Clarence was so down to Earth, so laid back, and so genuine. He shook everyone's hand, had his photo taken many times with many people, and even took time out to gel with little children and babies. I spent a lot of time watching and, at times, even speaking with Clarence during the signing. At the end, Clarence made time for me. We spoke a little, posed for a picture or two with me, and shook my hand.

So...Bruce fans...dig this...I shook the hand that shakes the hand of Bruce Springsteen on a pretty regular basis...

Check out my website - http://www.cameraiphotostudio.com/ - for more photographs of the Clarence Clemons book signing. Should be updated by tomorrow night.