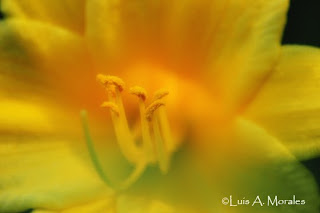 For me, there are certain colors that are hard to capture correctly...mainly reds and yellows. I know there are others, but these two colors really are tough. I was out shooting at Chanticleer, and the sky was threatening rain. I thought I would take a chance and fired off a couple shots of this beauty before I headed home. I am happy with the results. I corrected the color cast and added a Glamour Glow. Enjoy.
Posted by Luis A. Morales at 1:09 AM No comments:

Ever Get That Feeling... 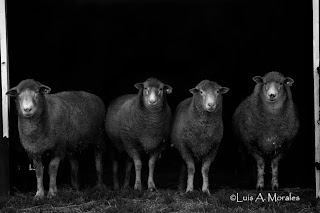 OK...This is a continuation from the last photo...I got to the location where I wanted to begin photographing, and I came upon several sheep. At first there was just one, then another, then another, until all four were just staring at me...not moving...it was a bit creepy and interesting at the same time. Cats are like that. They'll stare at you for a bit, then look away as if to say, "I am done with you...Good-bye." A friend of mine showed me a photograph of one of his cats, and it was a perfect example of a stare down...It is a beautiful photograph, but I remember those eyes...staring... 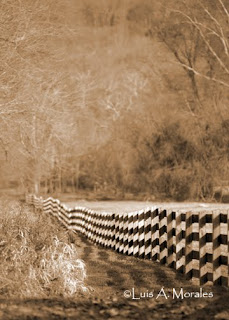 There was a moment when time, for me was at a crawl...a time when it seemed like summer took forever to get here and took forever to leave...amazing how time has changed that perception. This photo was lost in time...in my computer...I remember taking the photo, studying the scene, checking the composition, reshooting, then moving on to the next scene. I remember coming home, downloading the photos, then...time flew by, and this photo was forgotten, until now.
Posted by Luis A. Morales at 12:56 AM No comments: 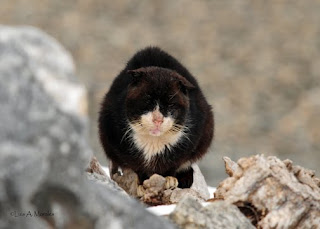 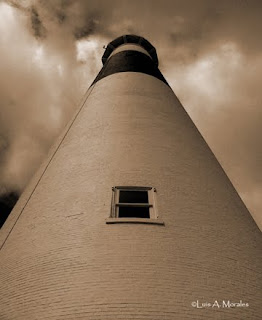 Last summer, my wife and I went to the Absecon Lighthouse in Atlantic City. It was the second time I have ever seen a lighthouse close up. I was having a difficult time getting the shot I wanted with all the buildings and power lines all over the place. I decided to take a dfferent approach and different view...up. I tried to center it as much as possible. It's a little off, but I like it.

I converted the color image to B&W and gave it a Sepia tone. I like the way it brought out the clouds and darkened the sky. The more you look at it, the more you get the sense that you can walk right up and touch the clouds. 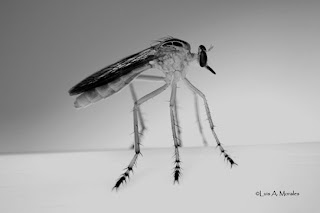 This is another image I submitted for the first night of the Macro/Close-up Photo workshop with Ed Heaton. I had taken this image last summer at my In-Laws house. I just purchased a Tamron 200-500mm and was getting a feel for it. I was sitting outside on a plastic lawn recliner, when I noticed this beauty on the recliner next to me, about two arm lengths away. It was waiting for its close up... 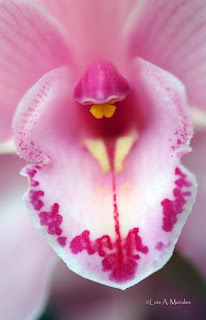 I am taking a course with Ed Heaton, Chester County Camera Club member, professional photographer, teacher, friend. The course is Macro/Close-up photography. It is one part critique, one part lecture, and one part hand-on.

This photograph was one that I submitted for the first class. For me, orchids are really tough to photograph, but since I purchased a Nikon 60mm f 2.8 Macro lens, I am having a blast...What happened to the Tamron? Well, I didn't realize that with a macro lens, the aperture is going to fluctuate depending on the distance the lens is to the object you are photographing...I thought there was something wrong, so I returned it. I went to another camera shop and looked at the Nikon, but the fluctuation happened again...This time, the associate was able to find out why the fluctuation was happening. Once this was explained to me, I felt better about it and bought the Nikon lens...
Posted by Luis A. Morales at 11:16 AM No comments: 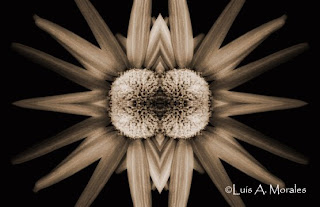 Mirror effect...I haven't done this type of special effect in years...This is a kaleidoscope filter I downloaded from a website (sorry...can't remember which). The first time I used a kaleidoscope filter came from a CD in a photo magazine...I lost the CD from various moves and forgot about it...There will be a gallery entitled "Special Effects" on my website and my Flickr website within the next day or two...Stay tuned... 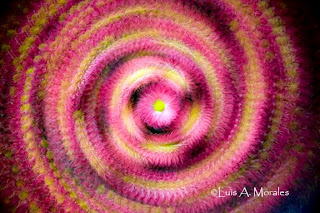 Late last year, a group of us from the Chester County Camera Club went to Longwood Gardens for a photo outing. While there Mary Brooks Brown showed me how to create a photograph using multiple exposures. I haven't done this before, not having read my entire manual, so I was eager to try it. As you can see, it is a really cool effect...This is a photograph using 10 exposures in one frame. 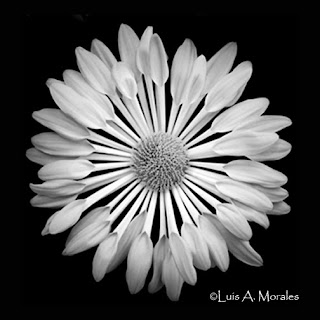 I am always trying to view my photographs in many ways...whether it be lighting, textures, toning, or composition...to see if I can take the original and make it a bit better. Sometimes, I have to sacrifice the rest of the photograph in order to get what I want. This photo had many little petals from other flowers surrounding this one. I cropped the other flowers out and stuck with this one as the focal point. Instead of an 11x17 image, I ended up with a 12x12. I added a black border around it to give it a square look. 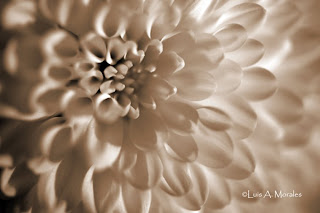 About a week ago, I went out and purchased a Tamron 60mm f2 Macro lens and let me tell you that I am having fun with this lens. I have been photographing some students at my school for the yearbook, and the portraits I am getting are wonderful. I wanted to experiment the other night with still life photography, so I got the flowers my wife had in a vase and took a night lamp I had laying around, and set it up. I shot some of the flowers in B & W and some in Color. These flowers are yellow, but I used the Nik Color Efex Pro 3.0 Complete to convert it to black and white. Then I added the Sepia tone to the image by using the Sepia Action found in PhotoShop CS3. I love the way the light plays with the petals and how there's just the right amount of shadows weaving in and out and all around the flower. I took more photographs of the different flowers in the vase and will post them on my Facebook page and my Camera-i Photo Studio website within the next couple of days. Today, I bought my wife some sunflowers...can't wait to see what happens.